Upminster started well and with their speed on the break threatened on numerous occasions to open the scoring. Eventually Flick Galbally received a ball from Freya Killilea inside Reading’s 25 and drove towards the goal before pushing the ball past the oncoming goalkeeper to take the lead.

Fine work from Upminster’s Goalkeeper Adelaide Thatcher-Grey kept the hosts out with a string of fine saves to keep Upminster ahead at the break.

Reading pressed hard in the 2nd half and managed to equalise with a far post tap in after a goalmouth scramble. This only seem to galvanise the Upminster girls who nearly took the lead again when Bethan Hodges saw her back post touch fall narrowly wide of the post after a great break from Lucy Rolfe. The pressure finally told when a well worked short corner was swept in by Lucy Rolfe to give the U’s a 2-1 lead with around 15 mins remaining.

The final minutes seem to last forever but a superb defensive display from Alex Heazel and Amy Watson kept Reading out and luck was on the U’s side when Reading saw a PC strike hit the post and the danger was cleared!

A terrific performance from the girls have seen them finish 4th in the England Hockey Tier 2 South Section. 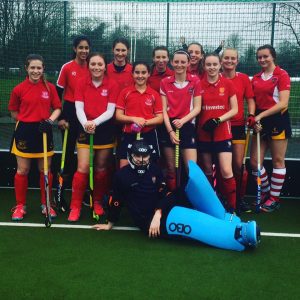